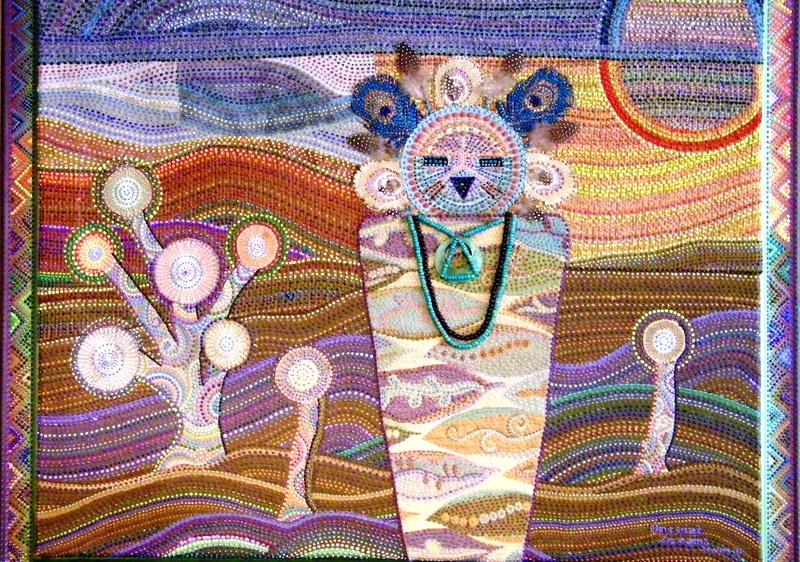 Maria VanderMolen’s art has spanned many genres – from traditional oils to photography, from mosaics to graphic design – before turning to mixed media.  Originally from West Michigan, Maria and her husband Scott moved to Las Vegas in 2006.

After obtaining her Degree in Arts/Media and Advertising/Public Relations from Grand Valley State University, she worked in the Graphic Design and Communications field.  Somehow, she found her way into the world of Human Resources and is still employed in the field after 20 years.

For many years, artwork was not a focus in her life.  However, after losing her only son to cancer at age 14, Maria turned back to the healing power of artwork.  The joy of art was once again sparked after meeting her current husband through his mother and an oil painting class.

The love of the desert and Southwest has been a recent theme in several works.  Her unique style combines fabric, paint, markers, and found objects into pointillist works reminiscent of Australian aboriginal dotted paintings.  She has dubbed this style "Dimensional Pointillism".

Together, Maria and Scott had produced a series of masks that were sold in the Lake Michigan community of Grand Haven.  Maria is a three-year Board Member of the Vegas Artists Guild and has participated in several of the group’s shows.  Her work has been shown at galleries throughout Las Vegas and Michigan.

In 2011 and 2012, Maria participated in RAW Artists in Las Vegas, a nation-wide organization.  She was nominated as one of three semi-finalists for the City through on-line votes both years.

Send to a friend

Find me on You Tube

Dots.... the Art of Maria VanderMolen